I’ve always wanted to try macrame but to be honest, I was very intimidated by it.  This past week I decided to stop hesitating and make my own macrame plant hanger and I seriously cannot believe how easy and quick it was to make.  Since it was my first ever macrame project I didn’t want to get too complicated and stuck with two very simple knots (the square knot and the spiral knot).  It probably took me about an hour to an hour and half to make the plant hanger and that includes documenting the process.  If you’ve been intimidated by macrame don’t be.  Give this tutorial a try. I bet you’ll be just as pleased and impressed with the end product as I was.  Plus you’ll save a bunch of money by making your own!

I purchased all of my supplies (minus the pot and plant) from Amazon.

Some of the links in this post are affiliate links, meaning, at no additional cost to you, I will make a commission if you click through and make a purchase.  Thanks for the support! 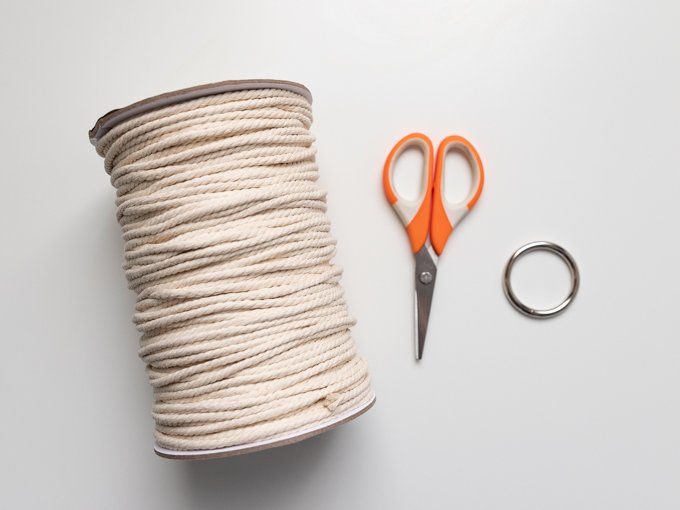 How to make a macrame plant hanger

Step 1 – Hang or tape the ring

You’ll want to have some resistance as you are pulling on the macrame cords so I would highly suggest either hanging your ring from a wall hanger or taping it to a solid surface in order to hold it in place. 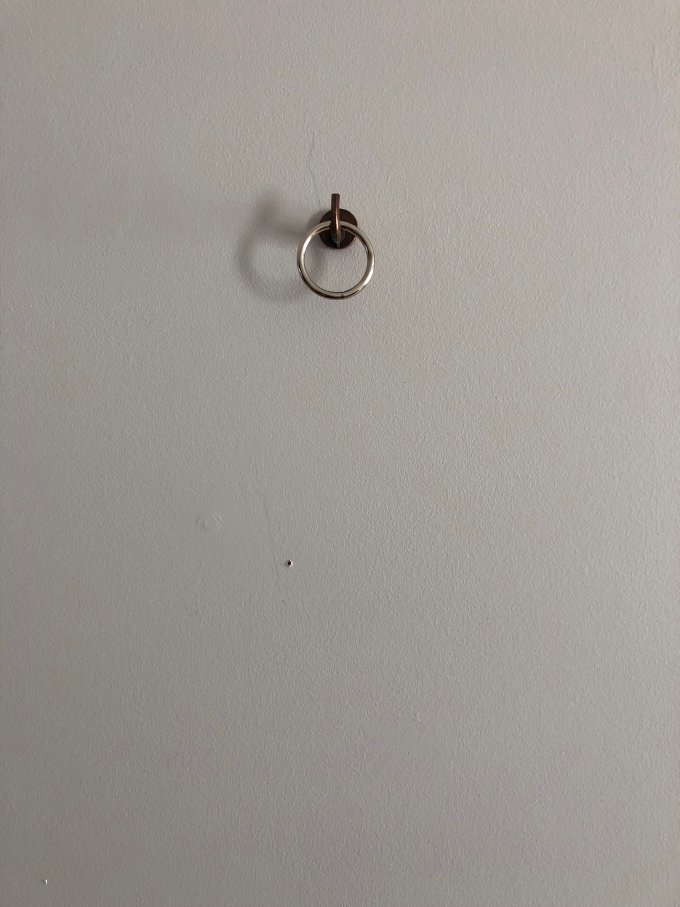 Step 2. Cut the cord to length

To make a macrame plant hanger you will need 8 cords.  The length of the cord will depend on how long you want your plant hanger to be.  As a general rule of thumb, you’ll want to cut your cords 4x the length of your project.  I wanted mine to be around 4′ (48″) in height so I cut each of the 8 cords to about 16′ each.  I’m 5’6″ tall so assuming my wingspan is 5.5′ I just portioned 3 of my wingspans of cord and then cut it.  Once the first cord was cut, I used that as a length guide to cut the other 7 cords. 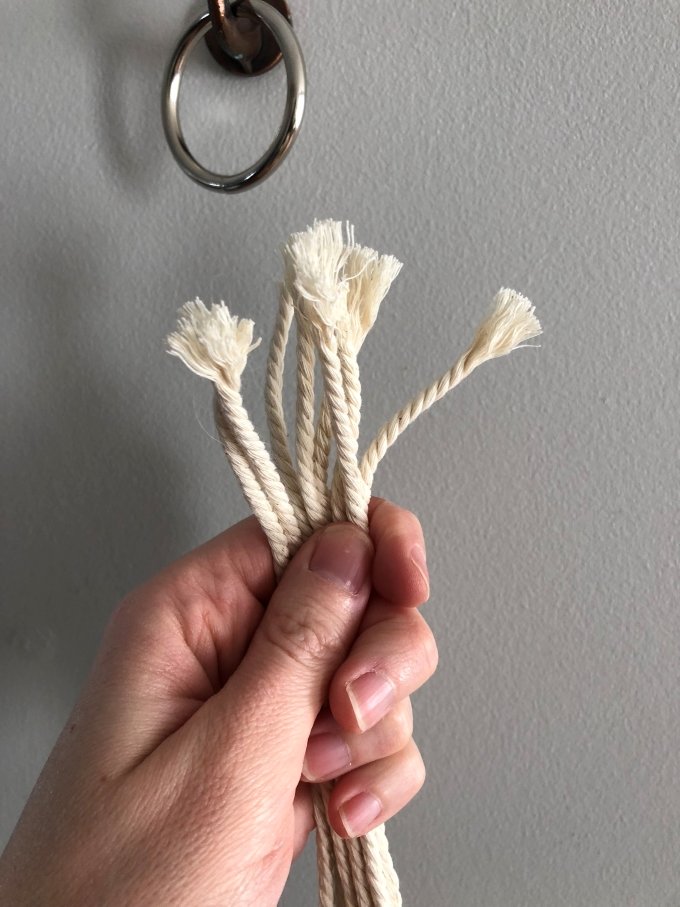 The next step is to secure the cords in place by tying a gathering knot to hold them together at the top of the hanger (directly below the ring).

Cut a piece of cord that is roughly 24″ in length then align one end of the 24″ cord with the bottom of the ring as shown in the first image below.  Make a loop as shown in the second image below that extends about 3 inches down the hanger.

Next, just hold on to both ends and pull tight until the knot disappears under the loops that you made.  Keep pulling up on the top end of the 24″ piece while you hold the bottom end tight.

The last step is to cut off the excess at the top and bottom as shown below.

Step 5 – Divide into four sections each with 4 cords

The 8 cords that were fed into the loop are now doubled over since there are equal portions on both sides of the loop.  That means that there are 16 cords hanging below the knot that you made.  The 16 cords will need to be divided into four sections each with 4 cords.  Find cords that are next to each other and section them into four sets of four.  Below you can see the first section of four that I made.

You’ll make the same knots for the same length on each of the four sections creating the four arms for your planter (sorry, I cant think of a better word for this).  You know how there are four parts that come down from the top of the hanger to the pot?  That’s what I mean. 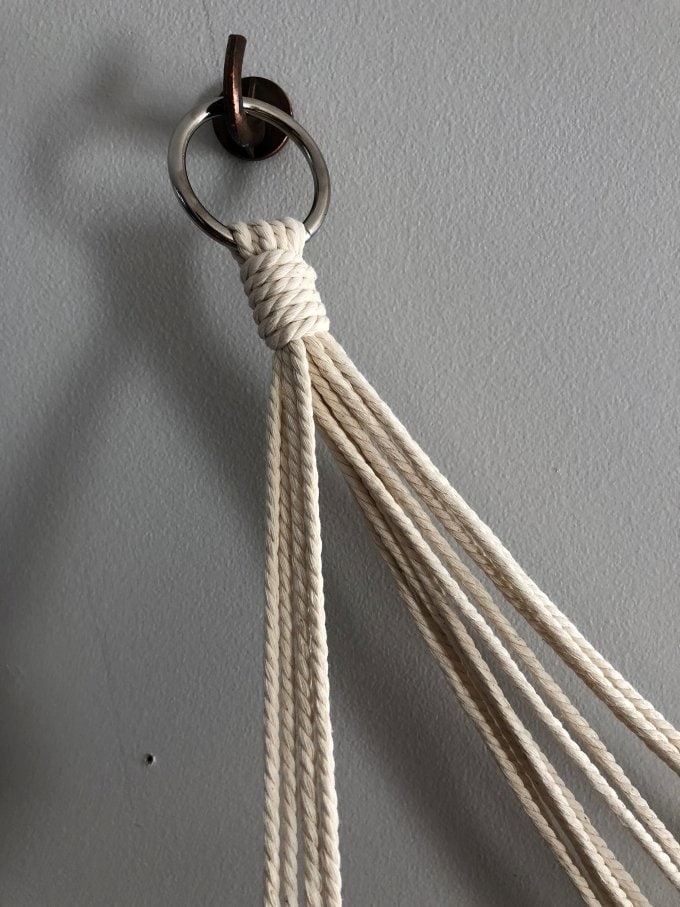 The next step is to start making knots to create your design.  I started with spiral knots and continued them about 7.5″ down each of the four sections.

How to make a spiral knot

I put together an infographic explaining how to make a spiral knot.  A spiral knot is nothing more than a half square knot that is continued for a desired length.  The trick is to continue tying from the same side of your 4 cords.

For example, in the infographic below you see 4 cords with four different colors:

Continue this process exactly as you did the first time and you will create a spiral knot.  The most important thing to keep in mind when making spiral knots is to always start on the same side of the cords.  So if you started on the right sides going under the middle cords do that the for the second knot, third knot and so on.  All knots should start from the same side.

Here is what the four sections looked like with about 7.5″ of spiral knots on each of them.  Looking good right? 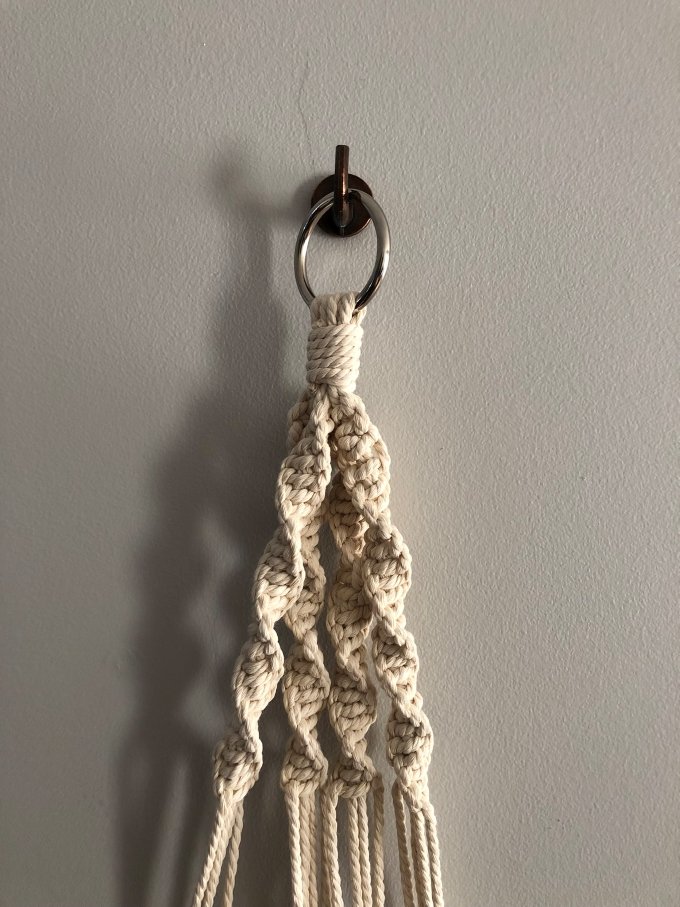 You could totally tie knots all the way down your piece if that’s the look you’re going for.  I decided to leave some untied portions for two reasons.  First, I didn’t want to spend the time tying knots for a plant hanger that is 48″ tall.  Second is that I wasn’t certain I would have enough cord for the final length be 48″ if I tied knots all the way down.  I guess a third reason could be that the untied portions mixed in with knots actually looks pretty cool.

I left about 6.5″ of untied cord before starting my next section of knots which were square knots this time. 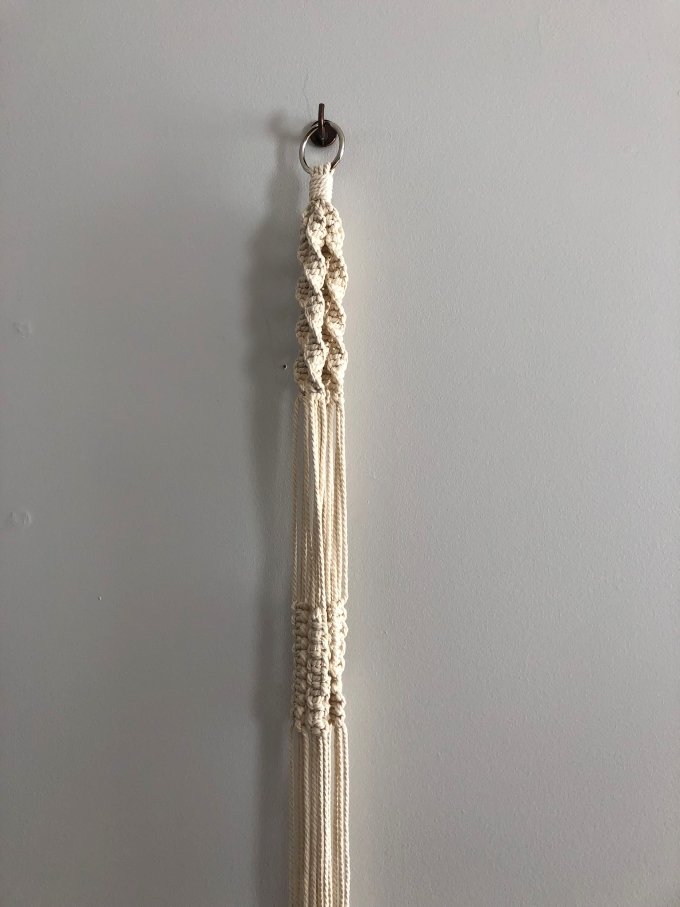 How to make macrame square knots

Square knots are very similar to the spiral knot.  The only difference is that instead of continuing with knots on the same side, you alternate left to right.

Below is an infographic explaining how to make a square knot.

In the infographic below you see 4 cords with four different colors:

Next, grab the left (green) cord and go under the middle (purple and orange) cords with it.  Then go over the teal (right) cord with the green cord.  Finish the knot by grabbing the teal (right) cord and going over the purple and orange center cords with it and then feeding it through and under the green cord loop that you made.  Pull the knot tight.

Unlike the spiral knot, the square knot alternates sides.

Continue with untied sections and knots

After the 4.5″ of square knots, I left another 6.5″ of untied cord.  After that, I tied another 7.5″ of spiral knots to match the length of the spiral knots at the top of the hanger.  Here is a recap of what I’ve tied so far. 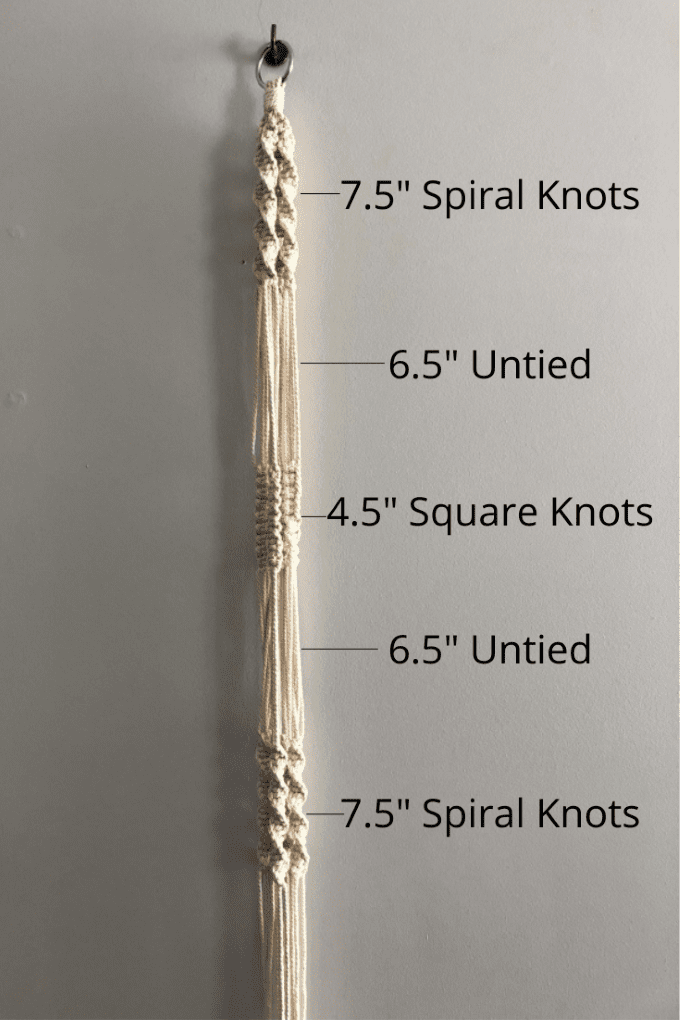 At this point, the length of each of the 4 arms was exactly where I needed them to be.  The top of the pot will line up with the bottom of the last set of spiral knots that I made.  Now it is time to make a net to actually hold the plant pot.

Grab two of the four sets of cords and be sure to choose two that are next to each other.  To make a net you will use a square knot to adjoin the two left cords from the right set of cords with the two right cords from the left set of cords.  Then continue this process until all 4 sets of cords are connected as shown in the second photo.  I made my square knots about 4.5″ down the cord length.  The size of your pot will dictate what length you should leave in between your least set of knots and the square net knots.

Repeat the above process one more time to make a diamond shape.  You may want to insert your pot into the hanger to determine exactly where you want your next set of knots.  Take the right two cords from the square knot on the left and connect them to the left two cords on the right square knot at a set distance down from the previous set of square knots.  For me, this distance was about 2.5″. 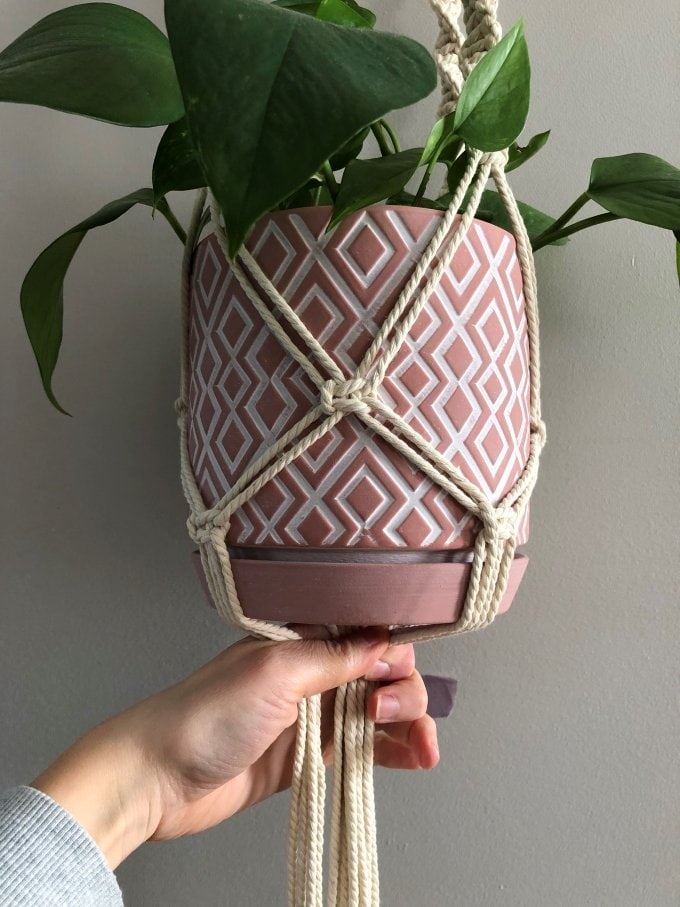 As you can see in the photo above, I set my pot into the hanger to determine roughly where I wanted the bottom of the pot to sit.  Once I figured out the length, I used the same process as step 4 and tied a gathering knot to pull all of the remaining cord together and create a base for the pot to sit on. 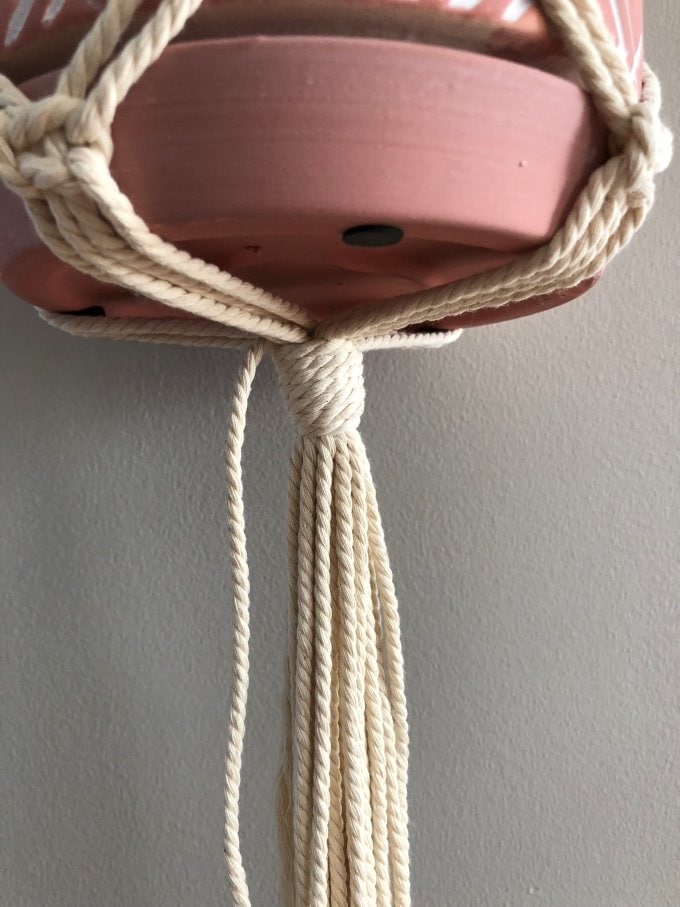 The last step is to cut the excess top and bottom pieces off of the knot that you made.  Then, you can trim the fringe to the desired length.  I cut the fringe at the bottom to about 10″ knowing that I would probably cut a bit more off once I got it hung up on the ceiling.

Here is the finished plant hanger! 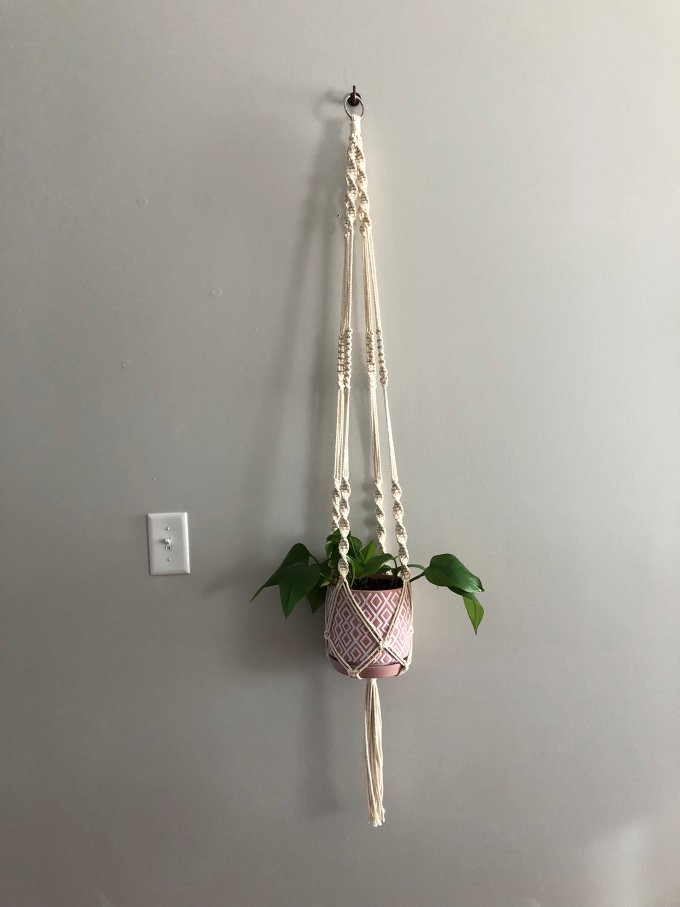 How to hang a macrame plant hanger

I would highly recommend having another person help with the hanging process.  It is very helpful to have someone hold the plant hanger in the desired location before you fully commit to the ceiling hook location.  If you don’t want the pot to touch the wall when it is hanging, you’ll need to offset the hook from the wall far enough to allow enough space for the pot.  The distance will depend on what diameter your pot is.  Also keep in mind what type of plant you will be planting in your pot.  If it is a plant that only grows upward you really only need to think about the pot diameter when determining the location of your ceiling hook.  However, if the plant grows outward and will be significantly larger in diameter than the pot you may want to consider that when placing the ceiling hook. 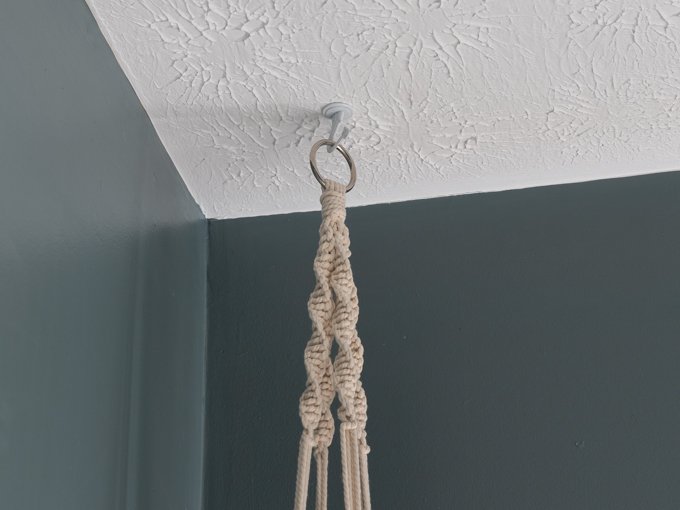 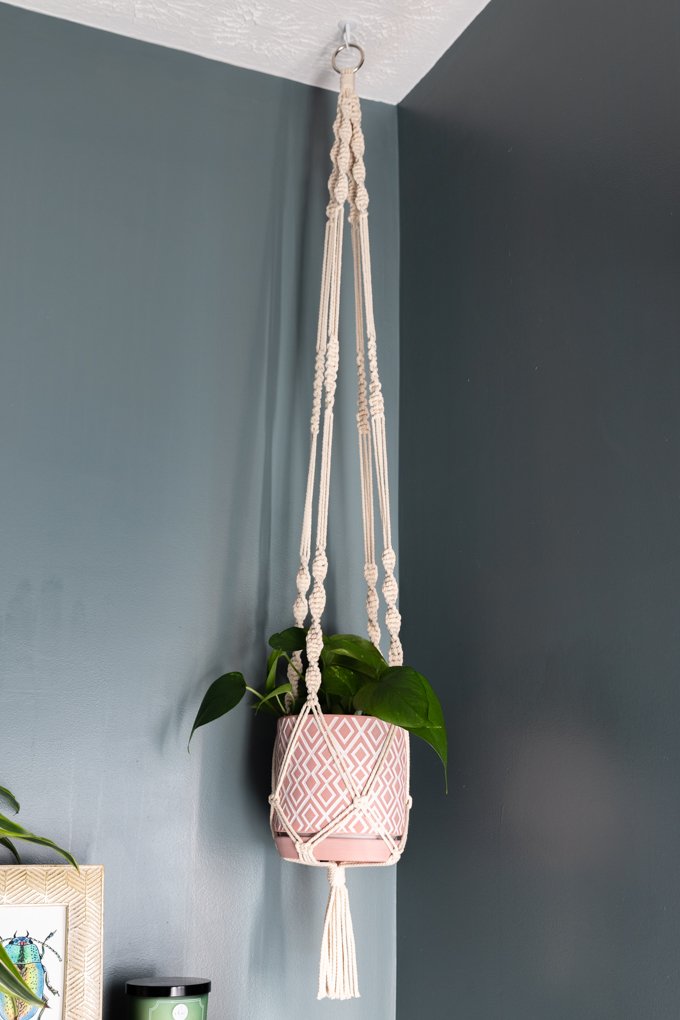 If you want to save this post for later, you can pin it below. 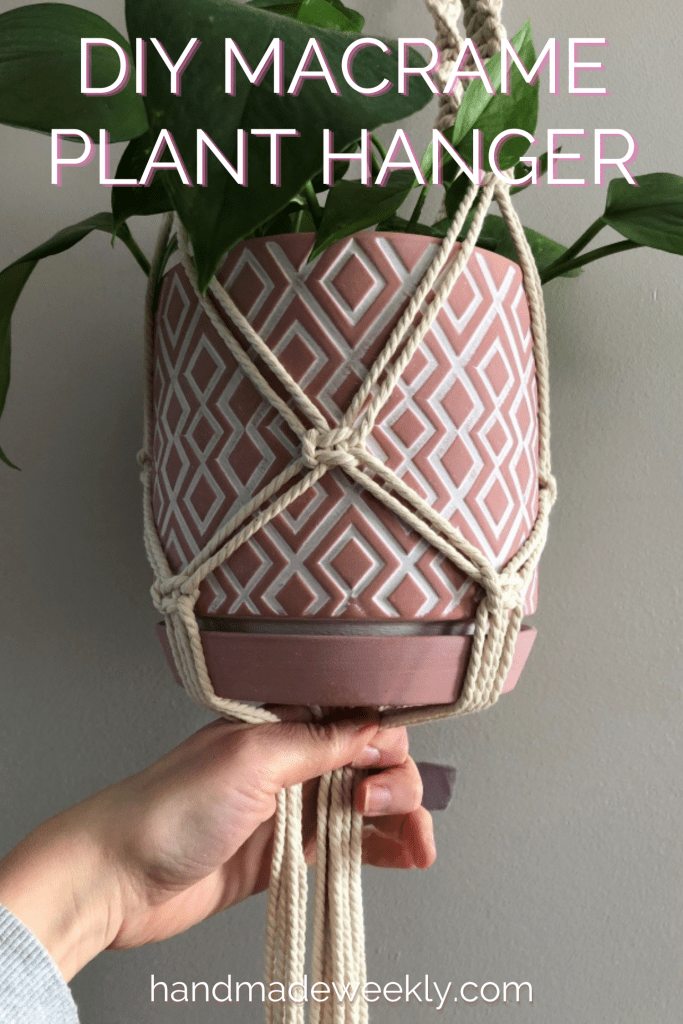 Other projects for plant lovers

Let me know what you think of this tutorial. 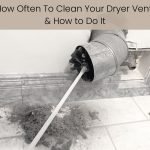 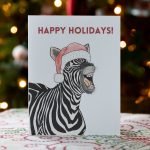 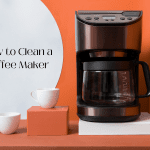 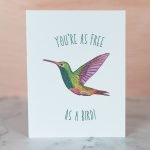 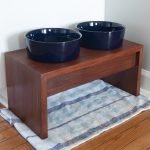